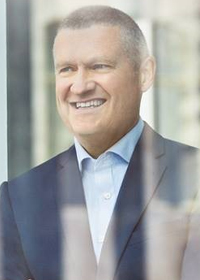 Mr. Lepage spearheads Intelerad Medical System’s mission to make a difference in healthcare by providing high-performance, scalable and reliable cloud-based medical imaging solutions for healthcare providers worldwide. His vision: help Intelerad become the cloud imaging platform of choice for large scale imaging providers by harnessing his team’s 20 years of expertise in the field and innovations such as machine learning and cloud computing to enable customers to work smarter and drive better health outcomes. Before joining Intelerad Medical Systems, Paul led TELUS Health for nine years and its mission to harness the power of information technology for better health care. In doing so, he significantly expanded TELUS Health’s position as the leading organization in healthcare IT in Canada. Mr. Lepage draws on more than 30 years of experience in the health telecommunications and information technology sectors. In 2009, he was the President and CEO of MediSolution Ltd., a leader in the North American IT industry. Prior to this, he held various leadership roles, including Chief Marketing Officer, Chief Operating Officer and head of Global Sales for several major technology companies. Since 2016, Paul has also managed TELUS Ventures, the venture capital arm of TELUS. The branch specializes in strategic investments in market opportunities whose innovations have the potential to accelerate the growth of TELUS, particularly in the area of health. Mr. Lepage has an MBA from Concordia University and a Bachelor of Engineering from Polytechnique Montréal. In 2016, Polytechnique honoured his extensive contribution to Health IT in Canada and the engineering profession with an honorary doctorate. He currently serves on the board of Génome Québec and is a member of the StradigiAI advisory board. Previous board mandates include Montréal InVivo and TOHealth! As well as on the advisory board of Edmonton: Canada’s Health City in Alberta. He also previously sat on the board of directors of Get Real Health in the United States, the Quebec Technology Association, IBWave, Nova Expertise Solutions, MediSolution and Blue Streak Technologies, as well as being a member of the Montreal Community Board of TELUS. Paul has also leveraged his expertise on committees for organizations such as CEFRIO, the Sandbox Project, the Ivey international Centre for Health Innovation and the Juvenile Diabetes Research Foundation, where he also acted as honorary president and national campaign manager for several years. He has received the ICD.D certification granted by the Institute of Corporate Directors.