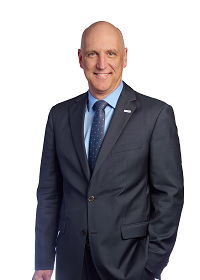 He began his career at INO, then worked at EXFO as Marketing and Product Management Director. In 2000, he created TeraXion, a company specializing in optical components for high-speed telecommunications, where he served as President and CEO until 2009. The same year, he became Entrepreneur in Residence at INO, and in 2011, he founded the company handyem, which specializes in innovative in vitro diagnostic devices. He then became president of Optel Medevon in 2016, a subsidiary of the Optel Group, which specializes in the medical devices.

With 20 years of experience in private companies in innovation management and commercialization, Alain Chandonnet took over the management of INO at the end of 2017 to assume the functions of President & CEO as well as member of the board of directors.