Quebec Captures A Third of All Venture Capital Deals and Secures more than 60% of All Private Equity Deals in Canada.

“The VC industry in Québec has kept up the pace in the third quarter and is on track for another great year. Québec’s economy is doing well, thanks in part to the innovative capacity of businesses, including startups” said Daniel Charron, President and CEO of Réseau Capital.

In private equity, CAD $1.3B was invested over 60 deals in the third quarter, bringing the year to date total for 2019 to CAD $3.1B over 233 deals. The largest disclosed private equity deals included:

So far in 2019, there have been 11 exits involving VC-backed companies. Of the 11, there were two IPOs involving Montreal-based companies. Lightspeed POS Inc. was listed on TMX with a market cap of $1.1B. with involvement from investors including Caisse de dépôt et placement du Québec (CDPQ), inovia Capital, Investissement Québec and Teralys Capital. Milestone Pharmaceuticals Inc. also closed its IPO this year on NASDAQ with a market cap of $468M.

“Québec can count on a strong, diversified and sophisticated financing chain to support its current and future economic champions. This is a key factor in promoting the growth and internationalization of companies, innovation and diversification of our economic fabric,” added Daniel Charron. 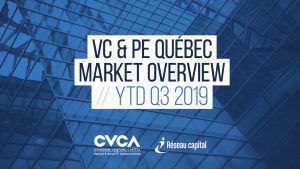