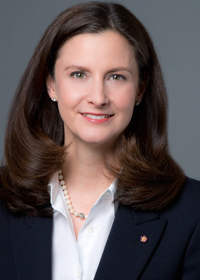 Tania Carnegie is the Founder and Leader of the Impact Ventures practice at KPMG. A recognized global leader in impact investing, she advises clients on developing strategies that integrate impact as a means to drive long-term value creation. Tania is also a member of the KPMG Enterprise Family Office leadership team, responsible for supporting families and high net worth individuals to develop and execute their own impact strategy.
Tania was a member of the Government of Canada Steering Group tasked with developing a national social innovation and social finance strategy, and Canada’s National Advisory Board to the G8 Social Impact Investment Taskforce. Tania is KPMG’s delegate to FCLT Global, and a founding member of KPMG’s Global Impact Investing Institute.
Active in her community, Tania is the inaugural Chair of Board of the TELUS Friendly Future Foundation, a Director of The Prince’s Trust Canada, Business for the Arts, and The Lieutenant Governor of Ontario’s Service Fund. She is a Global Ambassador for WE Charity, and a Member of the Advisory Boards of the Lee-Chin Institute at the Rotman School of Management, and the WE Social Enterprise Centre. In recognition of her community service, Tania has received the Lieutenant Governor of Ontario’s Volunteer Award, The Queen’s Diamond Jubilee Medal, and The Sovereign’s Medal for Volunteers.
For over a decade, Tania was a Member of the Royal Household at Buckingham Palace, serving as Lady in Waiting to HRH The Countess of Wessex. In The Queen’s 2019 New Year Honours List, Tania was appointed a Member of The Royal Victorian Order (MVO), Her Majesty’s personal Order for distinguished service to the Royal Family.
Tania is a Chartered Professional Accountant, and completed her MBA at the Rotman School of Management at the University of Toronto, and her BSc at Western University.