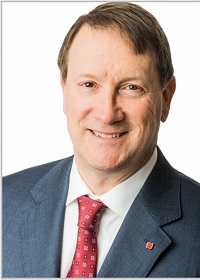 As President and Chief Executive Officer of National Bank, a position he has held since June 2007, Louis Vachon is responsible for the strategies, orientations and development of the Bank and its subsidiaries. He is supported by a team of senior officers who, with him, make up the Office of the President. At the time of his appointment, Mr. Vachon was Chief Operating Officer, a position he had held since 2006.

Mr. Vachon began his career in 1985 at Citibank and joined Lévesque Beaubien Geoffrion in 1986. From 1990 to 1996, he worked for Bankers Trust, where he was ultimately appointed President and Chief Executive Officer of the Canadian subsidiary, BT Bank of Canada. Mr. Vachon rejoined the Bank in 1996 as President and Chief Executive Officer of Innocap Investment Management. A year later, he was appointed Senior Vice-President – Treasury and Financial Markets.

Mr. Vachon serves on the Boards of Molson Coors Brewing Company and Groupe CH Inc. and is involved with a number of social and cultural organizations.

Mr. Vachon holds a Master’s degree in International Finance from Tufts’ Fletcher School and a BA in Economics from Bates College. He is also a Chartered Financial Analyst, CFA®.

Mr. Vachon is a Member of the Order of Canada and the Ordre de Montréal as well as a recipient of the Global Citizens Award from the United Nations Association in Canada. He has been awarded honorary doctorates by the University of Ottawa, Bishop’s University and Ryerson University, and appointed Lieutenant-Colonel (H) of the Fusiliers Mont-Royal. In 2014, he was named CEO of the Year by Canadian Business magazine, as well as Financial Personality of the Year by Quebec business publication Finance et Investissement, a title he also received in 2012. He was recognized by the Portage Foundation as its Grand Philanthrope for 2014. Mr. Vachon was, moreover, one of Canada’s Top 40 Under 40 in 2001.