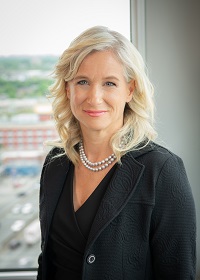 Ms. Janie C. Béïque was appointed Executive Vice-President, Investments in July 2018. In this role, she also sits on the Fonds’ Management Committee.

Ms. Béïque joined the Fonds de solidarité FTQ in 2000 as Vice-President, Legal Affairs and Corporate Secretary. In 2008, she moved to the Investment sector, where she served, in turn, as Senior Vice-President, New Economy, and Senior Vice-President – Natural Resources, Industries, Entertainment and Consumer Goods. In 2017, she was named Chief of Investments and Strategic Investment Initiatives. In this position, she was responsible for overseeing the Fond’s investment portfolio as well as defining and implementing the organization’s strategic investment direction. Prior to her arrival at the Fonds, Ms. Béïque was a partner at the law firm McCarthy Tétrault.

Holder of a law degree from Université de Montréal, Ms. Béïque has been a member of the Barreau du Québec since 1991. In 2005 she was named one of Canada’s top 40 corporate lawyers under 40 by L’expert magazine and in 2014 won a ZSA award in the “Accomplishment and business strategy” category. She has been a member of the Institute of Corporate Directors since 2012 and in 2015 earned an MBA from Georgetown University in the U.S. and ESADE University in Spain.  In 2016, she was named an “Innovation Leader” by the Government of Canada and asked to moderate roundtables in Québec and the Maritimes with a view to helping the government develop its innovation strategy.