Québec venture capital (VC) activity in the first quarter of 2017 remained vigorous with $207M invested across 30 deals—a 52 per cent increase over the $136M invested in the same quarter last year. In contrast, private equity (PE) in Québec is following the same downward Canadian trend—PE dollars invested in Québec dropped 47 per cent to $660M from Q1 2016.

The average deal size in Québec VC increased to $6.9M, up 17 per cent from the $5.9M in 2016. There was one single mega-deal in the $50M+ range: the $53M series C financing for Montréal-based Breather Products. The round was financed by a syndicate of US investors.

There were 12 deals in ICT companies which accounted for 62 per cent of all VC dollars disbursed in Québec. Agribusiness companies came in second place, with 19 per cent of all venture capital invested across three deals.

Noteworthy exits in the first quarter included the $133M acquisition of Saint-Laurent-based Accedian Networks and the Airbnb acquisition of Montréal-based Luxury Retreats International for an undisclosed amount.

Similar to VC, ICT companies were the largest recipient of PE dollars in Québec in Q1 at 27 per cent. The mining and resource sector ranking second at 25 per cent, with agri-forestry locking in the third position at 20 per cent.

Nine deals between $25M and $100M saw the largest share of total PE dollars invested in Québec at 58 per cent. The largest disclosed deal was $50M in this category—the financing of Falco Resources in Nord-du-Québec/ Abitibi-Témiscamingue by a group of investors which included Capital régional et coopératif Desjardins, Fonds de solidarité FTQ, Haywood Securities Incorporated and Investissement Québec. 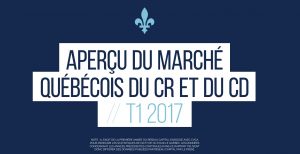