The Province Captures Three Quarters Of All Canadian PE Deals

The largest PE backed exits YTD 2018 were the $3B corporate buyout of Atrium Innovations Incorporated by Nestlé – the selling investors included Fonds de solidarité FTQ and CDPQ; and, the $1.9B Camso acquisition by Michelin; another sale involving CDPQ.

Réseau Capital, the Québec Venture Capital and Private Equity Association, is the only private equity association that brings together all stakeholders involved in the Québec investment chain. The mission of Réseau Capital is to contribute to the development and efficient operation of the private equity industry, which plays a major role in the development and financing of businesses in Québec.

Founded in 1989, Réseau Capital represents private equity, tax-advantaged and public investment companies as well as banks, accounting and law firms, along with many professionals working in the field. Please visit: http://www.reseaucapital.com

For more information or to arrange an interview, please contact:
Catherine Berbery
Direct: 514-880-2372

About the CVCA
We’re how collaboration happens and how innovation and growth thrive.

The CVCA is Canada’s professional association for the venture capital and private equity industry. Our services and support establish a favourable and competitive ecosystem and lay the foundation for greater collaboration, innovation, growth and market intelligence. We strongly advocate for fair and competitive policy to keep our industry energized and future-ready.

From coast to coast, we bring members together; connecting private capital professionals to each other generating meaningful partnerships, enabling connections to foster and knowledge to prosper. 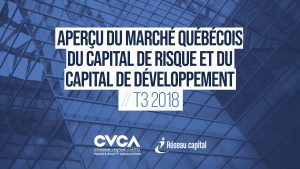