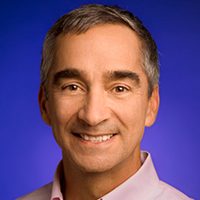 Patrick Pichette is currently completing a 2 1/2 year sabbatical, travelling the world, and leading an environmental project in Canada.

Patrick Pichette was Google’s chief financial officer from August 2008 until May 2015, when he became and still is an adviser to the Company. During his tenure at Google, Mr. Pichette’s responsibilities included Finance, but also various other functions including People Operations,
Real Estate, Employee Services, Google.org and many others.

He has over 25 years of experience in financial operations and management in the Tech and Telecommunications sector, including seven years at Bell Canada, which he joined in 2001 as executive vice president of planning and performance management. During his time at Bell Canada, he held various executive positions, including CFO, and President Operations. He was instrumental in the management of the most extensive communications network in Canada and its ongoing migration to a new national IP-based infrastructure.

Prior to joining Bell Canada, Patrick was a partner at McKinsey & Company, where he was a lead member of McKinsey’s North American Telecom Practice. He also served as vice president and chief financial officer of Call-Net Enterprises Inc., a Canadian telecommunications company.

Patrick is a board member of Twitter and the Trudeau Foundation, and serves as an advisor to a number of digital start ups including Zoona and Boosted Boards.

As previously mentioned he is also deeply involved in a conservation and research project with Nature Conservancy Canada in protecting Kenauk – a 65,000 acre territory between Montreal and Ottawa. www.kenauk.com and http://institutkenauk.org.

Patrick earned a bachelor’s degree in business administration from Université du Québec à Montréal. He holds a master’s degree in philosophy, politics and economics from Oxford University, where he attended as a Rhodes Scholar. He received the Order of Quebec in 2015.

Patrick and his wife Tamar are at the tail end of their extensive travel adventure, having explored every corner of the world. They are moving shortly from Palo Alto CA to London UK.