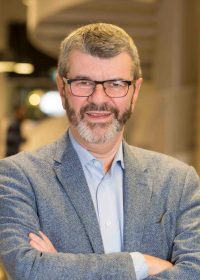 François Gilbert is known for the passion and conviction he has brought to his CEO roles at the helm of Anges Québec since 2008 and of Anges Québec Capital since 2012. He also leads FIER Succès, a Québec City-based venture capital fund, where he has served as CEO since 2005.

Recognized in the industry for his commitment to helping fledgling enterprises grow, Mr. Gilbert has made over a hundred private investments in recent years.

Between 1994 and 2004 Mr. Gilbert was Vice President and Chief Operating Officer of the investment firm Gestion Charles Sirois, where he managed a portfolio of investments in private companies operating across different sectors.

Mr. Gilbert has been involved in corporate management for almost 50 years, and is known for his keen interest in the mechanisms underpinning the principles of governance. After joining his first board of directors at age 17, he played a meaningful role in numerous organizations—notably Réseau Capital—and still sits on the board of Québec International and the Ose Entreprendre Challenge. François Gilbert is a graduate of McGill University’s Corporate Governance College and a trainer at the Institute for Governance of Private and Public Organizations (IGPPO).

Rooted in community values and leadership

François Gilbert grew up in the Saguenay, where he held various management positions in his family’s retail business from 1972 to 1984. In 1984–85 he studied for a master’s in small business management at Université du Québec à Chicoutimi. 1986 saw him set up Spectube, an aluminum processing company in Saguenay/Lac St-Jean—and the first in the industry that wasn’t owned by a multinational. He ran Spectube until 1991, when he sold his interest.

At age 18, Mr. Gilbert developed a keen interest in Quebec’s cooperative movement, where he would play an active role for over 15 years (1985 to 1990). He held a number of positions during this period, including president of the Saguenay/Lac St-Jean Federation of Desjardins caisses populaires, chairman of the Desjardins Group Human Resources Commission, chairman of the Desjardins Group pension and group insurance committee, and member of the board and executive committee of the Confédération des caisses populaires et d’économie Desjardins du Québec.

Looking to the future with purpose

François Gilbert has always been actively involved in the community. He was co-chairman of the Quebec United Way and cofounder of its Saguenay/Lac St-Jean campaign, as well as chairman of the Fondation communautaire du Grand Québec and chairman of the Faculty of Business Administration advisory committee at Université Laval.  As first vice-president of Fondation de l’entrepreneurship, he uses his influence and leverages his myriad networks on behalf of the organizations and ecosystems that call on him for help in achieving their goals more quickly. With his versatility, commitment and thirst for knowledge, he is always willing to take a fresh look at ideas and values in a bid to help people and their businesses move forward.

François Gilbert is the proud father of five children born between 1988 and 1998. His strongest professional motivation is a desire to share his experience and help startup entrepreneurs from across Quebec achieve success.